Social psychology is a broad field that asks questions such as:

The IAT has been widely used to study implicit biases for race, age, gender roles, and other social constructs, but it's not without its critics. Most obviously, people who take the IAT and are told that they have a bias against one race or one gender often protest that they do not. "What do you mean?" they say, "I don't believe that men should work and women should stay home! I know plenty of women who work, and I totally respect a man's choice to stay home. This test is not measuring my beliefs." What reasoning might psychologists use to counter this argument?

The participant may be unaware of the bias he holds (implicit cognition).

The participant may not want to publically disclose an unpopular belief (social desirability bias).

Even if the participant doesn't have a bias against women in careers or men at home, the IAT may reveal the dominant associations in the participant's culture that nevertheless influence individuals' behavior.

What do you think? Read some of the Background on the Project Implicit website, then describe which arguments for and against the IAT's validity you think are convincing. Can you think of a situation in which having a group of people take the IAT might be useful, and when it might be detrimental?

Review some of the classic experiments in social psychology and the principles they demonstrate.

In Snyder's (1977) telephone experiment, a man and a woman talk on the phone from separate rooms. The man is given a photo of either an attractive or an unattractive woman and told that she is the woman on the phone. An independent listener hears only the woman's side of the conversation and rates her friendliness and warmth. The man rates her as well. What do you think happens? Why? What are the implications of these results?

Men tended to rate women they believed were attractive more highly than women they believed were unattractive. Importantly, this became a self-fulfilling prophecy – those men who believed they were interacting with attractive women were friendlier and more enthusiastic on the phone (as rated by the independent listeners) than the men who believed they were talking to unattractive women. What's more, the independent observers also rated the women in the unattractive condition as less warm and less friendly. It's as if the men's expectations not only shaped their behavior, but also caused stereotype-confirming behavior in the women. The results suggest that the stereotypes we hold influence not only how we act towards others but how they act towards us.

Cognitive dissonance refers to the discomfort we experience when we hold conflicting beliefs or engage in a behavior that conflicts with a belief. One of our principle motivations is the drive to reduce cognitive dissonance, which we often do by seeking out justification for our behavior. In Festinger and Carlsmith's (1959) study, participants completed an extremely boring task, and were then asked to recommend the task to another person as interesting and enjoyable. For this favor, one-third of participants were paid $20 (a good deal of money at the time), one-third were paid $1, and one-third were not asked to do the favor. When asked later, how did the three groups of participants rate their level of interest in the task? According to cognitive dissonance theory, why did they do so?

Participants in the $1 group rated the task as more interesting than participants in either the $20 group or the control group. The control group experienced no cognitive dissonance: they found the task boring and they said so. The $20 group could use the money they received as justification for why they had acted against their true beliefs. But $1 was not enough of a justification for the last group. Faced with the conflicting positions "I told someone it was interesting" and "I know it was boring", these participants minimized the dissonance by modifying their original beliefs.

In the wake of World War II, a number of psychologists began to study conformity and obedience to authority. In Asch's experiments, groups of participants were asked to participate in "vision tests" in which they had to say out loud whether line A, B, or C was the same length as the first line. 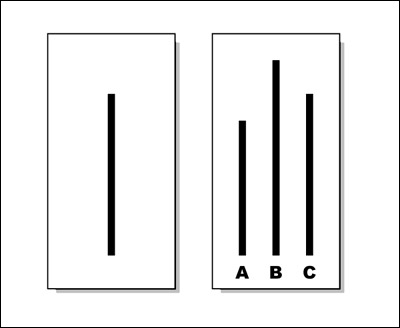 © Nyenyec on Wikipedia. Image uploaded under a CC-BY-SA/GNU Free Documentation License. This content is excluded from our Creative Commons license. For more information, see http://ocw.mit.edu/fairuse.

In fact, all but one of the participants were in on it, and after giving several correct answers, these confederates began giving answers that were clearly wrong. What about the lone subject – did he go along with the group, or give the obviously correct answer?

In the original experiment, there were 12 trials. Seventy-five percent of subjects conformed (i.e., gave the wrong answer) at least once. Apparently, the social pressure to conform was fairly high. Further experiments demonstrated that even a single dissenter among the confederates seemed the give the subject the confidence to announce the correct answer.

In the basement of a Stanford University building in 1971, Zimbardo simulated a prison. Participants were randomly assigned to the role of guard or of prisoner. Within a few days, participants had adopted their roles so completely (guards punished and tortured prisoners; prisoners rioted, then became depressed) that the experiment had to be terminated. What conclusions were drawn?

This experiment became evidence of the power of the prison environment to radically alter the personalities of otherwise stable and healthy individuals, and more broadly, of the way in which social roles and institutions mold individual behavior.

In 1961, Milgram invited participants to a Yale lab where they were told they would take part in a memory study. A confederate became the "learner" while the true participant became the "teacher." Taken into an adjoining room, the participant was instructed to quiz the learner on memorized word lists and to administer increasingly large electric shocks for each mistake. (The sounds of the "shocks" were played on a tape recorder, and the confederate produced a series of responses, from complaining to screaming to, finally, silence.) How did the "teachers" react to being put in this position?