This page summarizes some of the main points from small group discussion (recitation) sessions led by teaching assistants following the Brain I and Brain II lectures.

The brain! Let's talk about its major systems, how we study them, and how they make the mind.

This is just really cool to think about: the fact that there's this organ that sits in your cranium, that sits between your two ears. It has a consistency kind of like day-old flan; if you've ever had pudding that sat out, it's kind of like that. I know, right? It's gross, it's biological, it's squishy and it is you! It is who you are, everything about you, your hopes, your dreams, your desires, your wants, your needs, what you see, what you feel, what you experience, what you remember. All of it is based in the pattern of activity of the neurons in this brain that are talking to each other though chemical-electrical signaling.

It's just staggering to think that everything about the human experience comes out of this wetware. It's just incredible. I hope that we can convey that kind of excitement to you today."

Let's begin with a couple of questions.

The brain can be divided into 4 lobes. What are they? 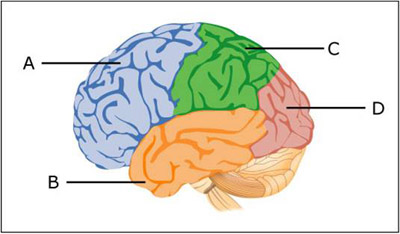 Lobes of the brain. (Image by MIT OpenCourseWare.)

These are very important parts of the brain; they do very different and exciting things. What does the frontal lobe do, principally? What kinds of things are instantiated in the frontal lobe, and what evidence do we have for that? How about the other lobes?

A. The frontal lobe is involved in cognition, attention, memory, decision making, and motor planning. Much of our early knowledge about the brain came from the study of surgical patients and those who had suffered strokes or sustained traumatic brain injury. (The study of such lesions and of neurological disease is known as neuropsychology.) One of the most famous neuropsychological cases was that of Phineas Gage, a railroad worker who had an iron rod driven through one side of his face and out of the top his head. It was reported that Gage became irresponsible and impulsive after his injury, suggesting that the frontal lobe instantiates decision making and inhibition.

B. The temporal lobe is involved in hearing, memory, object recognition, and semantic knowledge. Functional neuroimaging has enabled us to study many of the roles of the temporal lobe. For example, fMRI and PET reveal the activity of the brain through analysis of blood flow during speech processing and reading.

C. The parietal lobe is involved in memory, spatial-motor mapping, attention, and touch. During brain surgery, there is an opportunity to directly study the brain. For example, the representation of the body in the motor and somatosensory cortices was discovered by directly stimulating certain areas of the cortex.

D. The occipital lobe is involved in vision. One way to study how visual information is processed is to record the brain's electrical activity at the scalp while the person views different stimuli. This technique is called electroencephalography, or EEG.

Students in this class spoke about topics like these:

Consciousness — We have something like 100 billion neurons, all communicating with chemical-electrical signaling. And somehow, through all that chatter, we get an awareness of the world – and not just an awareness, but an meta-awareness: we know that we know. Consciousness is thought to be an emergent property of this complex system, but where does the transition take place? Is there a gradient of conscious states, such that we are more conscious than mice, which are more conscious than cockroaches?

Social interaction — We humans are supremely social creatures. How has the brain evolved to handle interacting with other brains?