The purpose of this problem set is to familiarize you with just how central a genetic test is today to the diagnostic and therapeutic process. Toward the end of this problem set you will also become familiar with how the knowledge of the genomic extent of human disease and its modifiers can be leveraged to improve the breadth and depth of our care for our patients. The tools that you will use for this problem set are simple: a Web browser, a search engine (e.g., Google), and a medical literature database (e.g., PubMed).

A 24 year old male, GM, presents in your clinic with a bump in his neck. Palpation and imaging confirms that he does have a thyroid nodule. However, after a fine needle biopsy you inform him that no malignancy was found but that such biopsies can often miss a thyroid malignancy. At that point, although you had previously asked about his family history, he remembers that his paternal uncle had Medullary Thyroid Cancer (MTC) and "bumps" on his lips and in his mouth. His uncle had mentioned something about being told he had something called "MEN IIB" and that "the mutation is on codon 790" (but he cannot remember the name of the gene). Your patient has surfed the web and has read that MTC can occur in families and is also associated with other malignancies. He wants to know if this applies to him and how you propose to work him up. He then mentions that he has a 3-year-old half-brother, PM, and wonders if PM is at risk. He had looked it up on Yahoo and found the following:

You read the contents of that link, but decide to do your own search.

You then do a search in Endocrine Abstracts and you find the following:

But, because your patient had mentioned that he did a Web search you look up the GeneTests site and find some interesting genetic tests that might be useful for the diagnosis.

1. What gene is most likely to explain GM's clinical findings?

2. What are the possible clinical associations for GM? How would you work him up or screen him for these other associations? Draw an alternative decision tree to the one shown in Figure 1. 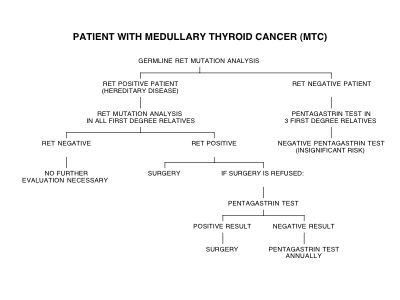 3. How would you work up (evaluate) his half-brother, PM? And, if he has the same mutation as GM, what would his treatment consist of?

4. During the work-up of PM, you find that he has worsening constipation and watery stools. Is this explained by the aforementioned mutation? Elaborate.