This discussion session complements the prior lecture session, Emotion and Motivation.

How would you define emotion?

It's difficult to do without just naming emotions that come to mind: happiness, sadness, anger, etc. Despite how simple and familiar these examples seem to be, our definition of emotion is fairly complex. Emotion is a physiological state that has the following components:

The functions of emotions are to help us approach or withdraw from things in the world, and to provide visual cues to others as to what we're thinking.

And those emotions that first came to mind? Ekman and Friesen (1971) concluded that there are six basic emotions shared by all humans: happiness, sadness, fear, anger, surprise, and disgust. 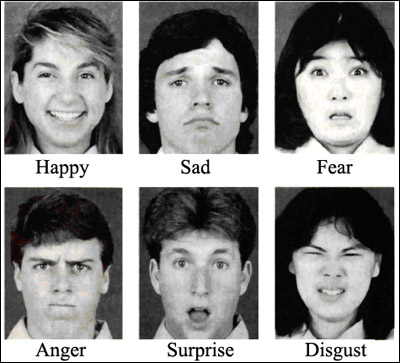 © Paul Ekman. All rights reserved. This content is excluded from our Creative Commons license. For more information, see http://ocw.mit.edu/fairuse.

Would you argue that there are other innate emotions shared by all humans? Or that the model is too simple – are there, for example, different varieties of happiness?

Furthermore, many researchers emphasize the role of culture in shaping emotion. Think of two cultures you know well. Is the valence of a particular emotion (such as pride, joy, or anger) the same in each? Is the same behavior characteristic of that emotion in each culture?

Classifying emotions is one thing, but explaining why we have emotions is quite another. Four major theories of emotion have been influential in describing the purpose of emotion: the James-Lange theory, the Cannon-Bard theory, the cognitive theory, and today's emerging synthesis model. To review, describe the relationship between event and emotion in each model. Describe some evidence in support of the theory and some evidence against it. Finally, describe the roles of brain, body, memory, and interpretation in the emerging synthesis model.

How does emotion affect cognition? It almost certainly increases the strength of a memory (for example, compare your memories of September 10, 2001 with your memories of September 11, 2001). But what about the influence of particular emotions when you're making decisions? This is a topic of great importance to many professionals, from teachers (who foster environments that enable students to learn) to pilots (who train to make emergency landings in stressful situations).

Imagine a typical decision you make on a daily basis: whether to save or spend your money. Imagine yourself making that decision under three difference conditions: when you're angry, when you're happy, and when you're afraid. In each case, what do you decide to do with your money?

Now imagine you enter your psychology class and you're angry, or happy, or afraid. Your teaching assistant hands you your test with a big, red D- written on it. In each case, how do you respond?

You can continue this thought experiment as it applies to different areas of your life. Overall, how would you characterize the effects of different emotions on decision-making?

Anger is known to lead to greater risk-seeking behavior. It gives people a sense of certainty and control. An angry person might make an impulsive purchase with their money, while a person who is feeling scared might be more cautious and save it. While fear tends to narrow the scope of attention (in preparation for fight-or-flight), happiness allows people to open up to new possibilities. A happy person might decide to spend money on a new experience.

Similarly, a happy mood could really affect how a person reacts to his bad grade. He might ask the teaching assistant about other options, such as doing extra credit work or re-taking the test. Anger might lead the student, certain that the test was unfair, to confront the teaching assistant. In a state of fear, the student might feel less certain about his own abilities and decide not to say anything.